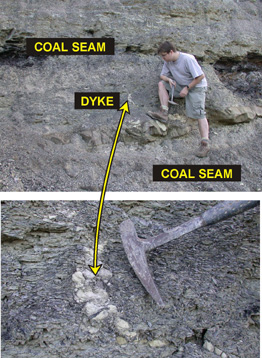 OUR KIWI CREATION RESEARCH GEOLOGIST, Mark Simpson continues to keep his eyes open for great evidence of creation and rapid deposition. He is pictured here after discovering a sedimentary sandstone dyke southof Auckland in the old coal field near Huntly. The sandstone under the coal has pushed its way through the overlaying coal seam and layers. This meant the sandstone under the coal was still soft and fluid while the coal formed on top. It pushed up through the coal without breaking it, so the coal was also still soft and fluid. It then proceeded through the rock layers many metres above the coal seam. All of which tells us the sediments and the coal were not laid down slowly one after the other over millions of years. Pray for Mark as he continues to look for any field observations that point to creation and catastrophic flood deposition.

All photos on this page are © copyright Creation Research and are not to be used without written permission.

Creation Research exists to seek evidence for the Biblical account of Creation, Noah’s Flood, Tower of Babel and related subjects. We investigate and promote such evidence in order to glorify Christ and build His church. Become part of the Creation Research Support Team Worldwide and help spread God’s Word about God’s World by purchasing our Books, T-shirts, through your gifts and your prayers. DONATE NOW